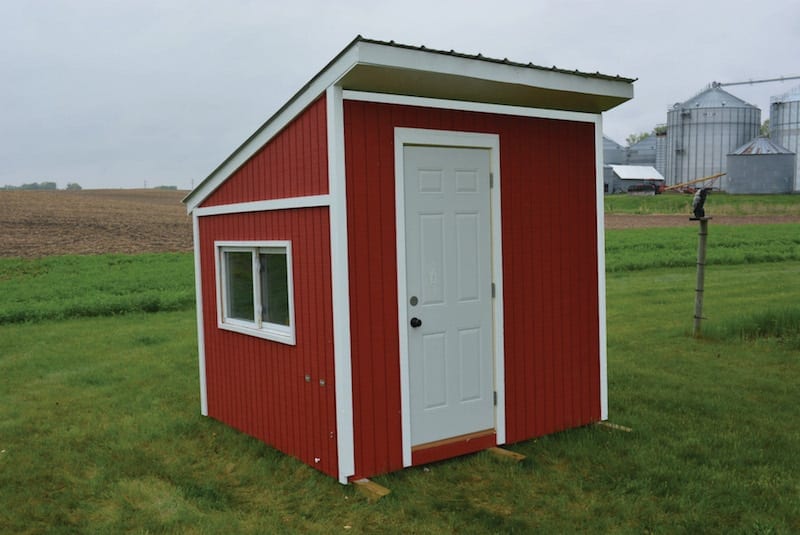 We recently decided to build a new chicken coop.  After searching for plans and getting everyone on board to help, we started our DIY project.  First we found a simple plan that fit the needs we were looking for in a chicken coop.  Because we live in a cooler area, we doubled the blue prints to give us room for additional insulation and larger windows to let in more light during the longer winter months.  We also wanted the option of turning it into a garden shed if we decide not to use it for chickens.

We started out by going to the local lumber yard and picking up all the lumber and materials that we needed to complete our blue prints.  Then the building began. We started with the base frame. A simple 8’x8′, 2″x6″ construction with screws or nails to anchor the frame. We ended up putting ours on 4″x4″ skids so that we could move it around the yard as needed. The blue prints call for mounting it on poles anchored in the ground.  After the frame was completed, we put our plywood flooring down. 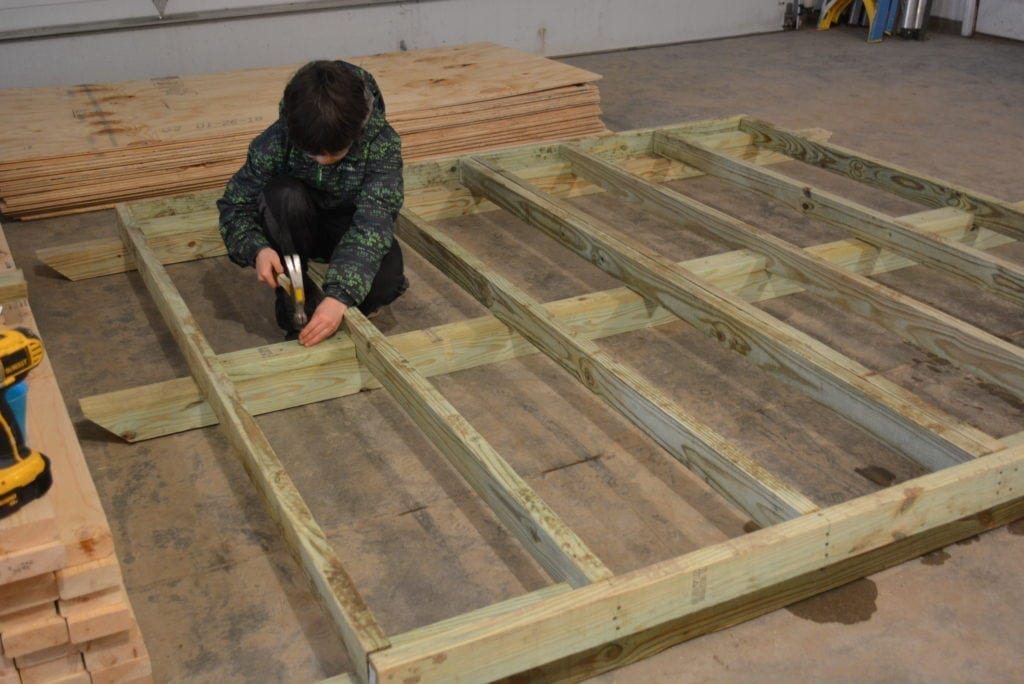 Next we began on the walls. It is a 2″x4″ construction with the studs spaced out evenly along the wall. We found two windows on the side of the road, those were framed in on the side walls to give us ample light year around. We used larger windows to let more light in, but smaller windows on 2 or 3 sides would also work. 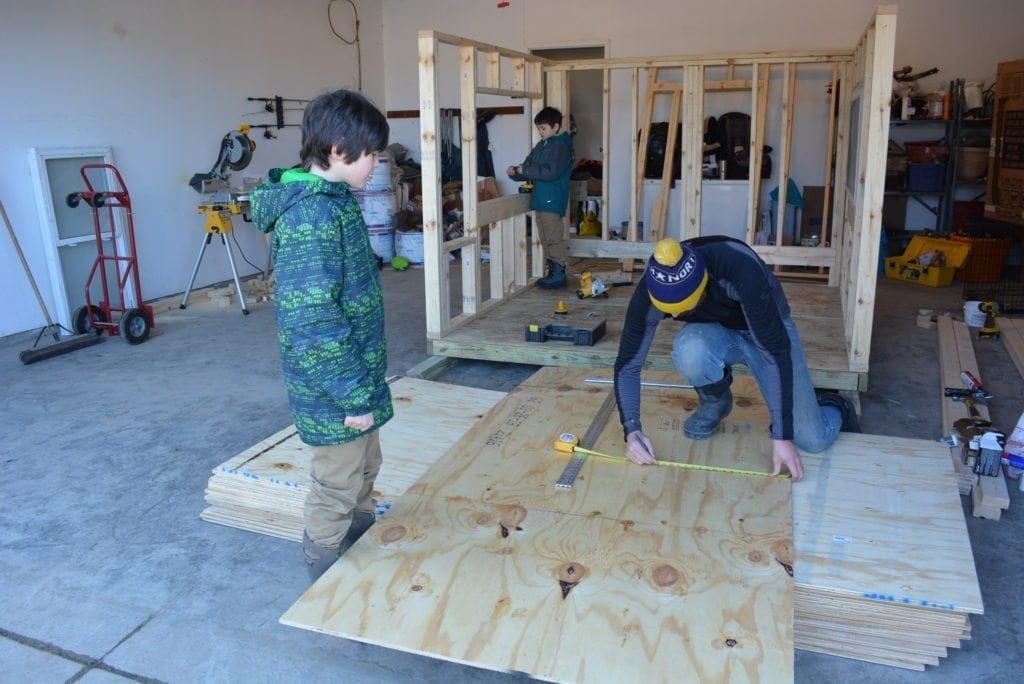 Once the walls were all framed in, we started on the roof.  We used 2″x4″x10′ long boards for our rafters. The plans called for notching them out, but we were able to find brackets at the hardware store that saved us the time of cutting the studs and it was just as stable.  The exterior was covered in plywood siding. It was cut to fit around the windows and the door frame. We also put plywood on the roof. 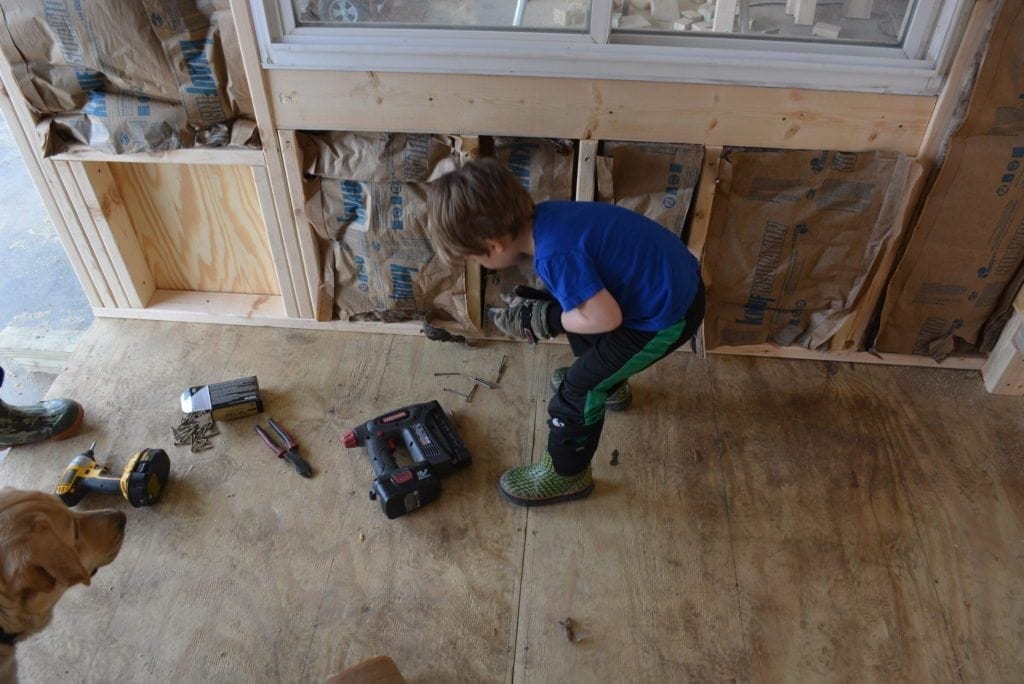 Inside the chicken coop, we filled the stud cavities with insulation and then covered the walls with plywood. We also ran some electrical cabling for two lights, an outlet, and a switch. We put lights in for visibility in the winter months, but also to use a heat lamp bulb. The outlet was for a heater if the heat bulbs were not keeping it warm enough in the cold winter months. We ran the cable to an external box on the back and terminated it so that we could run an extension cord to power the coop. 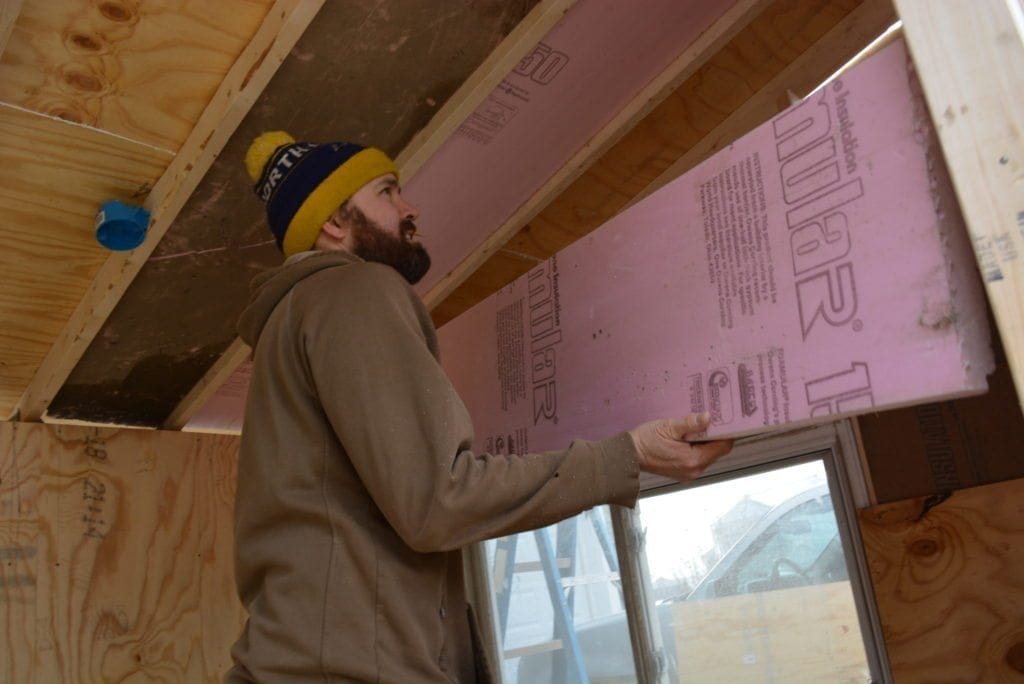 We then cut the exterior and the interior plywood for the chicken door so the chickens would be able to get in and out of the coop.  Once everything was sided and enclosed, we painted the exterior and interior of the coop.  We primed it first and then selected a barn red and white roof as it felt more farm-like. We used metal roofing for the roof, but leftover shingles from your local building supply store would work just as well. 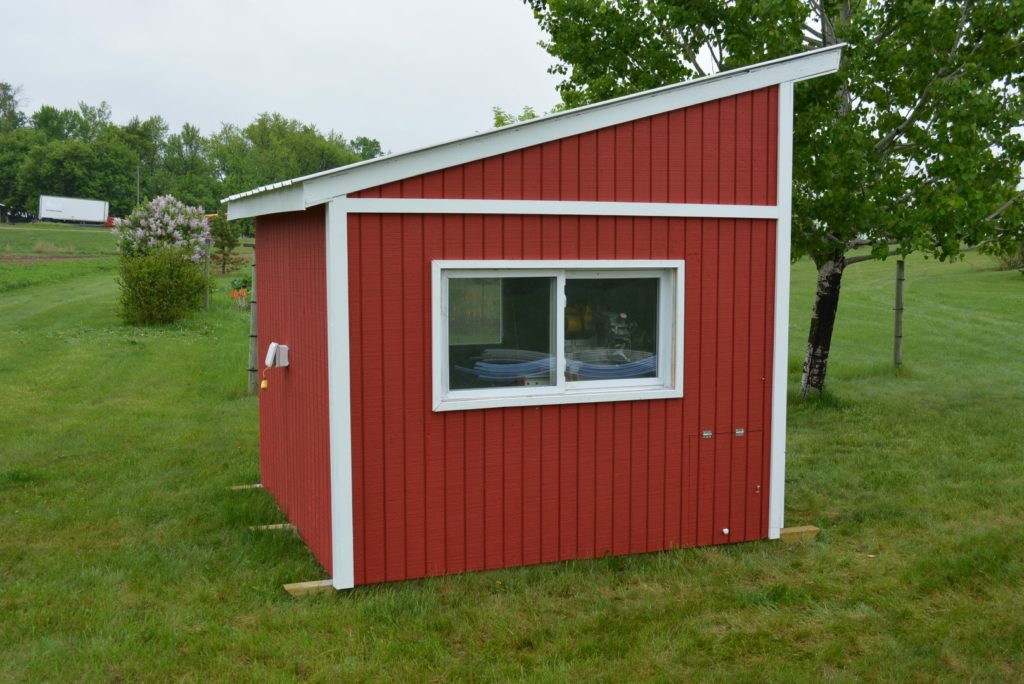 To finish the project off, we bought enough linoleum tiles to cover the floor.  It should make for easier clean up and give us a little longer life on the floor. The blue print calls for a trap door in the back for cleaning out the coop. We chose not to put it in for draft reasons. We wanted to make less cuts to keep the cold air out during the winter months. The idea seems like a good one if you live in a warmer climate and it would certainly make cleaning out the coop easier.  We also built some small nesting boxes for the chickens out of plywood. 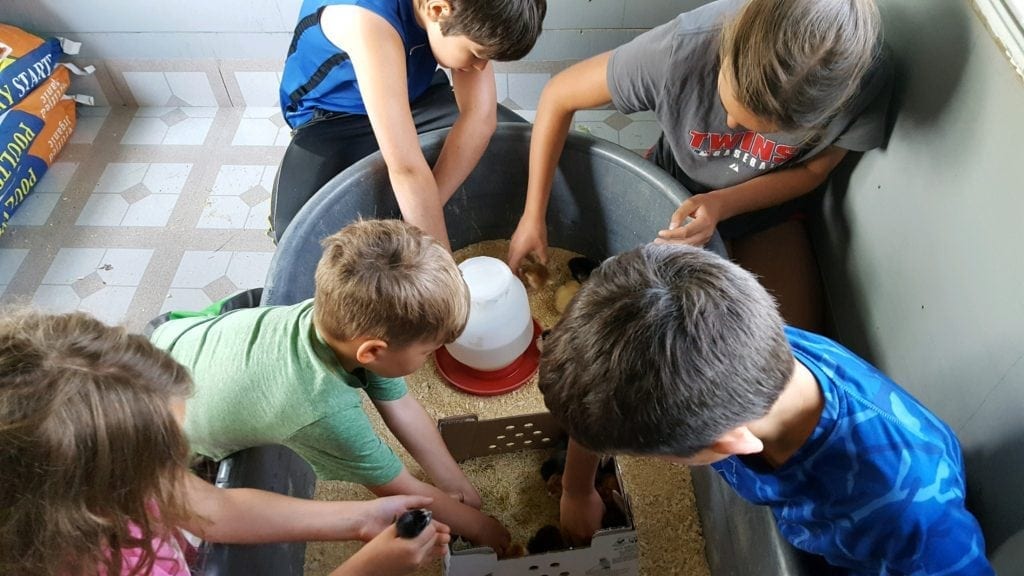 Our chickens should be all set for a nice home, especially this winter when it gets to be -10 outside. And we are all excited about eating those fresh farm eggs! 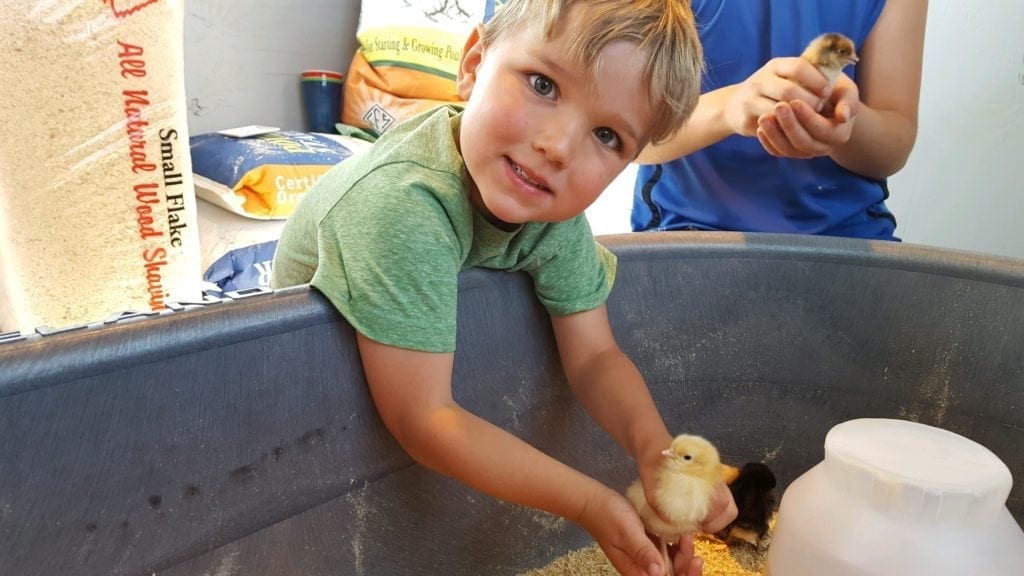 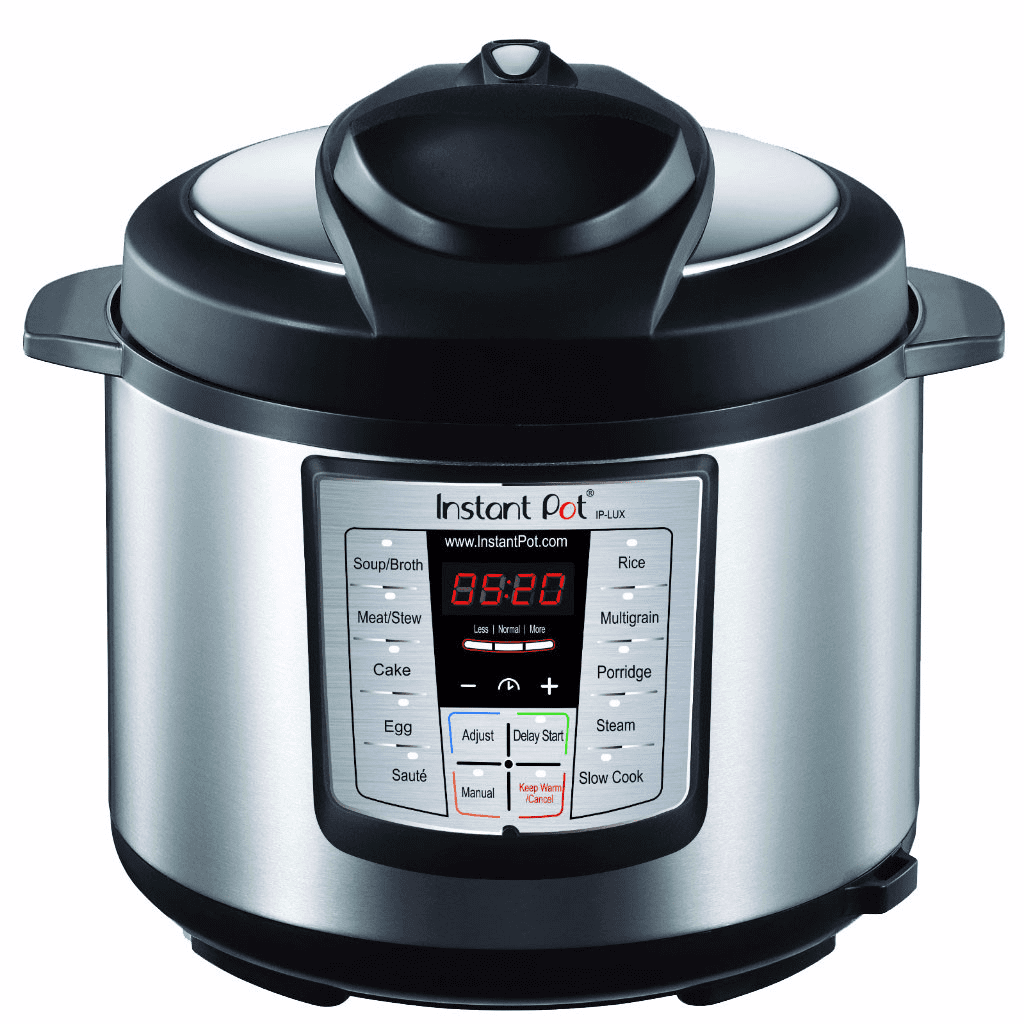